“The roll-up-your-sleeves, can-do, American spirit is not dead yet!” I thought when I read 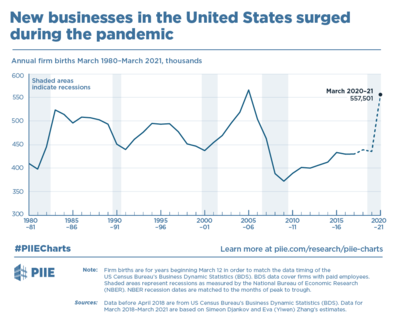 that “New businesses in the United States surged during the pandemic.”  The study by Simeon Djankov and Eva Yiwen Zhang at the Petersen Institute notes that new business applications in the US shot up by some 40% during COVID (April 2020 to March 2021, compared to the preceding 12 months.) That’s odd because business applications usually fall during recessions. (See the exhibit.)  What’s going on?

Djankov and Zhang put the unexpected jump in business applications down to “entrepreneurship by necessity, starting a business because of lack of opportunity in the job market.” That’s not, on the face of it, a hugely persuasive explanation.  Jobs disappear in every recession without the enormous apparent enthusiasm for setting up your own business we’ve seen during COVID. A more convincing argument in the study is that the COVID recession was, unusually, driven not by a collapse in demand around the economy but by social distancing. So there was more scope for people to switch into socially distanced occupations like online retailing. That’s plausible but unlikely to be the whole story.

My favorite explanation is different. At least part of the recent surge in business applications is the work of another fabled American type: the conman, the swindler, the grifter, the looter, the fraudster, the thief, all looking to plunder the abundant COVID emergency relief funds laid out by Uncle Sam.

According to CNN, “Among the top targets by prosecutors were fraudsters trying to steal from the Paycheck Protection Program, with people running schemes ranging from exaggerating their business expenses to concocting fake companies to get funding. In one Texas case, a man pleaded guilty to 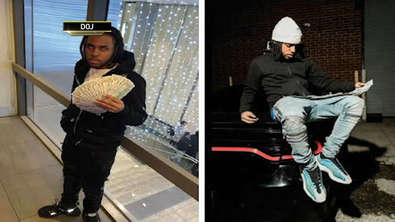 seeking $24.8 million in PPP loans using the names of 11 different companies to make loan applications to 11 lenders. He managed to obtain $17.3 million in forgivable loans and used the money to buy homes, jewelry and luxury cars.” And then there’s this band of goons from Brooklyn who allegedly not only stole $2 million in pandemic-related unemployment benefits but pranced about displaying their loot on social media.

So enormous is the scale of COVID fraud – some $63 billion by one estimate – that the Justice Department has set up a new COVID-19 Fraud Enforcement Task Force, on top of ongoing crackdowns by the Secret Service and other agencies. A report from the Inspector General at the US Small Business Administration (SBA) makes for staggering reading. If I understand this correctly – and I can hardly believe my eyes - the SBA had already doled out well over a million potentially fraudulent loans totaling over $100 billion by the end of July 2020.

For the classic study on the rich culture of the American swindler, see “The Big Con” (1940) by linguistics professor David Maurer, which was a leading source for the movie “The Sting.”

“The grift,” says Maurer, “has a gentle touch. It takes its toll from the verdant sucker by means of the skilled hand or the sharp wit. In this, it differs from all other forms of crime, and especially from the heavy-rackets. It never employs violence to separate the mark from his money.”